Submitted about a year ago

Greg Byingtonabout a year ago
That's a nice pic of an interesting a/c, Parker! I was interested in it and started poking around to find more info. I believe this a/c's FAA N number is: N4313. And if that's correct, then here is more info from Joe Baugher's website:

I'm also guessing that the "BC" in BC-313, as seen on the a/c, refers to BLACK CROW AVIATION LLC (in California) which is listed by the FAA as the registered owner.

So, assuming all that is correct, BC must have acquired it sometime after 2007 and managed to get it back in the air. In any case, pretty interesting! Oh, and you might want to add a "4" to the front of the registration number. It should be: 44-34313.
Report 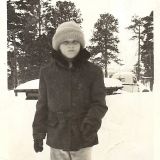 Parker SuttonPhoto Uploaderabout a year ago
Thanks for the info, Greg
Report