Submitted 10 years ago
WASHINGTON — The Federal Aviation Administration said Thursday it wants to fine Cessna Aircraft Co. $2.4 million because the company's failure to follow quality-control procedures caused a 7-foot section of the wing of high-performance plane to detach during a test flight, among other problems. Read more: http://www.kansas.com/2011/09/23/2028559/faa-proposes-24-million-fine-against.html#ixzz1YmY9TnAR (www.kansas.com) More... 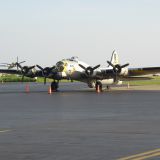 vanbess 10 years ago 0
They shouldn't have left the plant in Bend Oregon, they had dedicated staff that loved what they were doing and were committed to safety. Had they stayed I might have considered a future upgrade (long in the future). But they chose to move to a country where quality means nothing
Reply ↓•Permalink•Report

1AVI8RX 10 years ago 0
so totally true. I would never consider buying an aircraft made in Mexico. I would rather ride a horse!
Reply ↓•Permalink•Parent•Report

linbb 10 years ago 0
Another story that is wrong the wing skin not the wing section detached. Oh well at least it didnt do a nose dive or a tail dive. LOL
Reply ↓•Permalink•Report

David Stark 10 years ago 0
Never should have made that move to Mexico. I wonder when it will sink in to these company execs that American labor is the best in the world and worth every penny they pay to them, in this case millions.
Reply ↓•Permalink•Report

David Stark 10 years ago 0
I wonder when it will sink in to these execs that American labor is worth every penny that they spend to use it. How many times has a Made In Someplace else failed in the first year and been thrown out by your household. Buy American!
Reply ↓•Permalink•Report

Wingscrubber 10 years ago 0
This failure has nothing to do with poor Mexican workmanship, although I agree that moving production from Bend Oregon to Mexico was wrong, selfish and unpatriotic of Cessna leadership - the wing unbonded because of the humidity present in the manufacturing facility in Chihuahua according to the article, you can't control the weather! If the epoxy used was suited to curing in ordinary dry air, then the humidity problem would have been unforeseen, now they probably have to cure the wings in a hermetically sealed curing chamber.

It also unbonded during a TEST flight, flown by a TEST PILOT - this is their job, to find pre-delivery squawks. Albeit this was a BIG sqawk but it was not a quality escape because the aircraft was still under test and had not been delivered or certified when the incident happened.

This heavy-handed penalty from the FAA is un-necessary and uncalled for, Cessna has very effective internal quality control processes and corrective action processes to address unforeseen problems such as this.
This and other recent penalties handed out by the FAA are motivated by their desperate financial situation, handing out million dollar penalties over the correct placement of cable ties, tube bend radius and panel repair time to name a few.

This is like a local city council implementing a 'speeding crackdown' in order to pay their bills - no genuine impact on safety or procedure, it only generates revenue.
Reply ↓•Permalink•Report

Wingscrubber 10 years ago 0
Correction - the article states 13 aircraft were affected, so I may be wrong on the pre-delivery point, but regardless of the aircraft which needed precautionary remedial action, the one aircraft which suffered a failure was in FLIGHT TEST. Until the aircraft completes acceptance flight testing and gets an N-number, it is not FAA-certified - as such the FAA should not be allowed to penalize for airworthiness squawks which are rectified before delivery.
Reply ↓•Permalink•Report

P.J. Gibson 10 years ago 0
What you see is what you get!!! Quality control?? Are you kidding? Cheap labor......for the bottom line.....we as American workers are being sold down the river by the Government......why the he'll don't we produce our own products and these foreign countries can buy from us?? Well.....it is all about the dollar.....humm.....it always has been. It is what it is........we as a people will just sit by and let it happen.....STAND UP FOR FREEDOM.....AMERICA IS A GREAT COUNTRY!!
Reply ↓•Permalink•Report

1AVI8RX 10 years ago 0
Get the hell out of Mexico and save not only money from future fines from questionable mexican workmanship, but bring jobs home to Americans where they should belong.

You can always lessen the quality of your GA aircraft door locks to save more money.
Reply ↓•Permalink•Report

N5827P 10 years ago 0
Really saved a bunch of money by moving jobs to Mexico, didn't you Cessna Execs? Give yourselves a raise from the paltry 18 million a year you get now. Oh, I see you already did. Good thinking.
Reply ↓•Permalink•Report